Sometimes I come across a piece of user-interface that brings a smile to my otherwise perpetually scowling face. Usually it is a fairly mis-shapen dialog or utility application. I smile because I can almost picture in my minds eye how this dialog was created. A developer needed a screen for something, one or two text boxes and not much more, so they created “the dialog”, maybe just to “try something out“ and always with the intention of removing it before the product ships. They discovered they needed a few more parameters, so a couple more controls were added in a fairly hap-hazard fassion. “The dialog” exposes “the feature“, something cool or quite useful. Admittedly “the feature” is more tailored towards power users, but it’s still pretty cool. The developer thinks of new parameters that would make “the feature” even more powerful and so adds them to the dialog. Maybe a few other developers or power users see “the dialog” and also like “the feature”. But why doesn’t it expose THIS parameter? New controls are added. Pretty soon the technical team are so used to seeing “the dialog” the way it is that they become blind to its strange appearance. Ship time approaches and the product goes through more thorough testing, and “the dialog” is discovered, but it is too late to be heavily re-worked. Instead it is given a cursory spruce-up.

I’ve lost count of the number of times I’ve seen “the dialog“ in different guises (and I’ve probably implemented a few of my own too). Here are two candidates that were close to hand. I think the worst offender I ever saw was a WMI utility from microsoft - it was like a whole application of “the dialog”s thrown together. 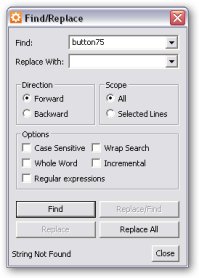 Here’s my quick checklist of things to look for if you’re trying to avoid create “the dialog“ yourself.

You could add "inconsistent capitalization" to that list. The bottom-right of the second picture uses 3 styles all in the one GroupBox.

You could also add "you label checkboxes with things like ‘Only go deeper’".
karen
Hi,

Thanks for this funny observation about the dialog! I’ve seen many of these and what’s worse — I’ve seen non-tech users struggling with them.

I think that often the problem goes even deeper than poor UI design. Many times I wonder who even needs the freaking zillion options in the first place. But maybe that’s just me.

To prove your point — see the discussion at http://www.codinghorror.com/blog/archives/000734.html
And btw — too bad that Jeff ripped your whole post and stole your thunder :-)
Vexorian
Is the first dialog that bad? I swear I’ve seen it everywhere and seems all right for me, could you point the problems with it? Perhaps it is just that the second one is so extreme that it makes the first one look really good.
Vexorian
Look at the screenshot there:

It is a project in which I, a developer made the interface for. So don’t think the second dialog is an exaggeration.
cluat.com
Pingback from cluat.com

IE7 in the mix