Shame on me for taking a whole week to write about this, but it has been a busy week. I attended Codecamp Oz organized by Mitch, Greg, Chuck, Andrew (with the help of many others too numerous to list here) last week-end. I enjoyed the event a great deal. Charles Sturt University was a well-equiped venue and it was great to see so many people in attendance. I might be biased but I liked Dominic and Joel’s individual presentations the best, with Bill Chesnut’s Biztalk talks and Troy Magennis’ C#2.0 features talks as runners up. I was really disappointed that Dominic didn’t get to finish his talk - some of the slides at the end would have been quite controversial I think, possibly sparking an OOP revolt.

Suggestions for next year would be to have more power outlets so people can recharge more easily while listening to presentations, and maybe have 2 tracks. That way people could speak for longer (I think 1 hr would be better than the 45 minutes alloted this time) and we could have reasonable breaks between talks (for lunch etc). Those are minor tweaks to what was a very well run event. My purpose-built Coding Horror t-shirt was warmly received and I am now working on some “custom” jobs for people where they supply a code snippet they would like to appear behind the “horror” face. For those who weren’t there below is a smartphone picture from Bill’s first Biztalk session (this was taken from close to the front - the room was much larger than it appears here). 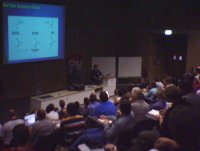